April has a been a complete and utter whirlwind of a month. Now with 3 days into May, I can finally look back at April with a grin on my face and knowledge that rarely have I experienced time periods with such amazing live music.

The first show was Young the Giant with St. Lucia at the Cosmopolitan Resort’s Blvd Pool. You already know how much I love that venue.

I was a bit nervous that St. Lucia’s sound would not work outside. Let me tell you how wrong I was. St. Lucia put on the second best show I’ve seen at the Blvd Pool (only Edward Sharpe & the Magnetic Zeros were better). It was obvious most of the crowd was there for YTG, but the energy level of St. Lucia was incredible. It is very clear that Mr. St. Lucia himself and front man of the touring band, Jean-Philip, loves what he does. He had a huge smile on his face during the entire show. I cannot wait to see them live again.

Young the Giant was also fantastic.

I am now more of a fan of St. Lucia than I was before the show. Enjoy my favorite track “This is the Way You Remember Me” (this is not from the show I saw)

Show two was the one I thought would be the highlight of April (I’ll get to that later). On the bill was White Lies, The 1975 and The Naked and Famous. If you’ve read this blog, you know how I feel about TNAF. This was my first show at the brand new Brooklyn Bowl Las Vegas. After having seen 6 shows at the BBLV this past month. I can tell you that I’ve never felt this way about a venue before. This venue knows my needs and desires. The Brooklyn Bowl completes me. I had a feeling that TNAF would be an “inside” band. This show was far and away better than their show at the Cosmopolitan pool in October. I was very impressed with White Lies. I didn’t like their album so much, but when they preformed these songs live, I felt like I was present for the heyday of the Cure. Their sound is very strong, clear and Cure like (which is not a bad thing in my book). My favorite song of the evening, (no shocker here) was “Girls Like You” from The Naked and Famous.

Show number three was also at the Brooklyn Bowl…This time it was Robert Randolph and the Family Band. I’ve been a fan of RRTFB since the early 2000’s, but never lived anywhere he would tour…until now. He played super late shows (4:00am) and afternoon shows (1:00pm). I saw him on Easter at 1:00pm and it was as close to god as I may get. The man plays the sacred steel like no other, and despite the small crowd (of mostly Phil Lesh fans from the night shows) Robert Randolph and his band (many of them actual family members) had huge smiles on their faces during the very jam heavy set. 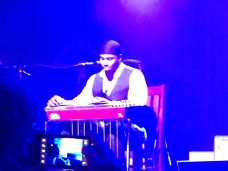 Show number four was one I was hoping to see but wasn’t sure. I like “dad rock” and despite what others may think O.A.R. fits into this category. Now, don’t get me wrong, they are a great band with a great number of excellent songs, but they tend to skew a bit to the late 30’s early 40’s demographic…aka…young dads. I went to the show with a group of people I never met before, and had a blast. I saw the band on the their 3rd night of a 3 show weekend at the Brooklyn Bowl. As a band with a very deep catalog, I know that each show was different. For the final show, the band had a full horn section which was not present in the previous two shows. I was an OAR fan before the show, but as with many bands…now that I’ve seen them live, I am hooked. I would love to see them again.

After seeing them live, their song “Shattered” is now one of my songs of the season.

During the weekends the Brooklyn Bowl usually has two shows a night. The early show (8:00pm-ish) and the late show (12:00 am). The weekend of O.A.R. the band Gogol Bordello was playing the late show. @begt had recommended that I see this band. Obviously I love live music…but 12:00am? Really? I mean, they would have to be really good to keep my attention. Well, dear reader, I can assure you that Gogol Bordello puts on one of the most amazing live shows I have ever seen. You read that right…they put on one of the most amazing high energy shows I have ever seen. The proof is the in pudding. When they announced two more shows this past weekend (not in April, but its okay) I made sure that I saw them again. This “gypsy punk” band knows how to rock. If you see one show from a band you are not familiar with this year…go see Gogol Bordello. Seriously, go see them. Both nights were incredible. The first night was more “mellow” but that is only because the second night I saw them I experienced being in a mosh pit for the first time in my life. I also had beer, wine, sweat and god knows what else spilled on me. It was worth it every minute. Enjoy “Wanderlust King”

Not to be outdone by April, May has started off with a bang. Two shows in the 3 days. The first was the 1970’s hard rock band Wishbone Ash performing their classic Argus  in its entirety. I was not familiar with this band, but did recognize their music. It is obvious by looking at the lead singer/co-lead guitarist Andy Powell that drugs may not have been as big of a priority for him as with his contemporaries. It was clear why Andy Powell is one of the most important guitarists in rock history (Traffic Magazine). And then of course, I saw Gogol Bordello again.

Next week May kicks into high gear with Hunter Hunted, NONONO and Twenty One Pilots…but that show deserves its own post.

@Begt has been encouraging me to write about the April full of music I am about to have. Lets be real, I wish I was wealthy because there are SO many good acts coming  to Las Vegas in the next month. Though if I spend all my money this month, I will not be able to attend things like LouFest, so I need to keep my priorities in order!

I’ll start with who I am going to see, and then talk a bit about those I will not see, or I most likely will not see.

My April of music starts next Friday with one of my favorite new bands, opening up for a band that I just started getting into. This concert is at the Cosmopolitan Pool on the same night that indie favorite Lana Del Ray is playing the newly renovated Chelsea at the Cosmopolitan. Now, I like Lana Del Ray, but I would not miss this show at the pool.

The openers for the evening is the great St. Lucia. I am pretty pumped to see them. I’ve watched a couple live videos and the band seems to know what they are doing. My only concern is that when I saw another synthpop group at the BLVD Pool, The Naked and Famous, their sound just didn’t work outside. Regardless, I am excited to be taken back to the synthpop glory days of the 1980’s.

Here is “September” from their 2013 release When the Night.

The headlining act of the night is Young the Giant. These guys hail from due west and the city of Irvine, CA. I really enjoy their indie style and catchy lyrics. I think this show has the potential for being the best I’ve seen at the pool save Edward Sharpe & The Magnetic Zeroes.

Here is “Mind Over Matter” from their 2014 release of the same name.

Up next is a show I’ve been waiting for since I first saw The Naked and Famous in October before Life is Beautiful. This time they are playing the brand new Brooklyn Bowl at the Linq with The 1975.

Here is “I Kill Giants” from their newest release In Rolling Waves. (I find this video only slightly disturbing).

I’ve not listened much to The 1975, but I enjoy their 80’s vibe. Here is “Settle Down” from their self-titled release.

The other show that I am not going to miss is Robert Randolph and the Family Band. They just wrapped up their first of two weekends and Brooklyn Bowl today, and will be coming back later this month. I’ve been a fan for a few years, and never thought they’d come to Vegas. I am glad I have been proving wrong. Ask yourself, “do I want to see the greatest steel guitar player who has ever lived play live?”. There is only one answer to that question.

Here is “Amped Up” from Lickety Split.

So on to the bands I probably won’t see, but maybe I will:

(this is why April is so freaking outstanding)

Grouplove (sorry B, YtG and St. Lucia win out)

Empire of the Sun (miracles happen, so maybe I will be able to go)

Haim (I wouldn’t see them unless it was free anyway)

Foster the People (sorry B, this one is also hella expensive)

O.A.R. (would be awesome but these tickets are not wallet friendly)

The Infamous Stringdusters  (the price is right, but its a Sunday night)

Let us not forget that May will bring at least one show I will be seeing, Twenty One Pilots, and hopefully Childish Gambino (tickets are actually reasonable).

The summer will have more in store as the Cosmopolitan has the summer series “Set your life to Music” kicking off at the end of May and only a few bands are on the lineup.