So for the first post I blamed my post LouFest honeymoon. The delay for this second post is due to my body telling me to go to sleep instead of writing blog posts. My body won every night this week, except for this one! (Checkmate nature).

Day 2 of LouFest was epic. I am not one to use this word lightly…or even really at all, but I cannot find any adjectives that will accurately describe the way that I feel about Sunday. We started off with rain that cleared up moments before the first set. @Begt, Jennifer and I sat in the car (literally across the street from the entrance) and waited for the storm to blow over.

So, without any order, except for number one being number one, here is my Top 5 LouFest moments from Sunday:

5a) We entered onto the LouFest grounds just as the rain slowed to a drizzle. @Begt had convinced us that the band to see first thing was the Mowgli’s. I’d been listening to the other Sunday opener a bit, but maybe it was the rain, the pre-funking, or the universe commanded it, but that first set from the Mowgli’s set the standard for the day. This Southern California based 8 member band is a mix of sunshine, the beach, sparkles and love. Their energy from the first song all the way through their hit “San Francisco” was absolutely contagious. They immediately connected with the crowd through their poppy, loved filled jams. They have an Edward Sharpe & the Magnetic Zeros feel about them, but they are their own breed of band. They are touring throughout the US this fall with WALK THE MOON and others. If you can, you owe it to yourself to see them perform.

5b) The second show of the day was another SoCal based group, Youngblood Hawke. if you own a radio, you’ve most likely heard their catchy anthem “We Come Running”. This band also played with incredible energy and had the crowd on their feet and dancing in the muggy early afternoon. I had enjoyed “We Come Running”, but now consider myself a fan. My favorite performance from them was “Forever”. Here is an acoustic version of the song.

4) Like Day 1, there were a lot of bands that were either right before or right after a band I really wanted to see. This was the case with the Nashville based Wild Cub. This band was a SXSW fan favorite and have been hitting up various festivals all summer. Their set took place right before the Alabama Shakes. We had already been hanging out by this stage because much of the surrounding area was tree covered and we wanted to rest while listening to Local Natives. I had listened to a few Wild Cub tracks before, and was pretty impressed. This group put on a hell of a show. Some of their tunes sound like they could have been composed in 1985 but with a contemporary flair. I am really looking forward to hearing more from them in the future. They have a few festival shows this fall, but I am sure they will be back on tour once the weather gets nicer. Enjoy their “hit” Thunder Clatter:

3) If loving hippie makes me a hippie, call me a damn hippie. After seeing Edward Sharpe & the Magnetic Zeros in July, I’ve been anxiously awaiting seeing them at LouFest. Literally the only complaint I have about LouFest is that they scheduled ESM0’s to perform immediately before the Killers. This meant that if I wanted to get a good spot for the Killers I’d have to leave ESM0’s early. This was not a good position to be in. But, it had to be done because…its the Killers…the greatest American Rock Band of my generation (you can take that to the bank my friends because that statement is as true as gold is valuable). They started off their set with my two favorite ESM0’s songs “Man on Fire” and “That’s Whats Up”. As a kid decked out in UNLV gear, I was dancing like a hippie because ESM0’s are just that good. Alex was also a bit more aware of his surroundings than he appeared to be in Las Vegas.

2) About a month after first seeing Imagine Dragons live in 2010, we started listening to the Imagine Dragons Pandora station with religious fervor. One of the songs that frequented this station was from a quirky quartet from Cincinnati, OH. Having a band name that is written in all caps may seem presumptuous, but when you are WALK THE MOON you can do whatever the hell you want. This may just have been the best set of the entire festival. They rocked out on most of their catalog including “Next in Line”, “Tightrope” and the incredibly catchy “Anna Sun”, which had the entire crowd screaming. What little of my voice I had left after this show was lost after the Killers. This band is touring with the Mowglis this fall, they shouldn’t be missed. 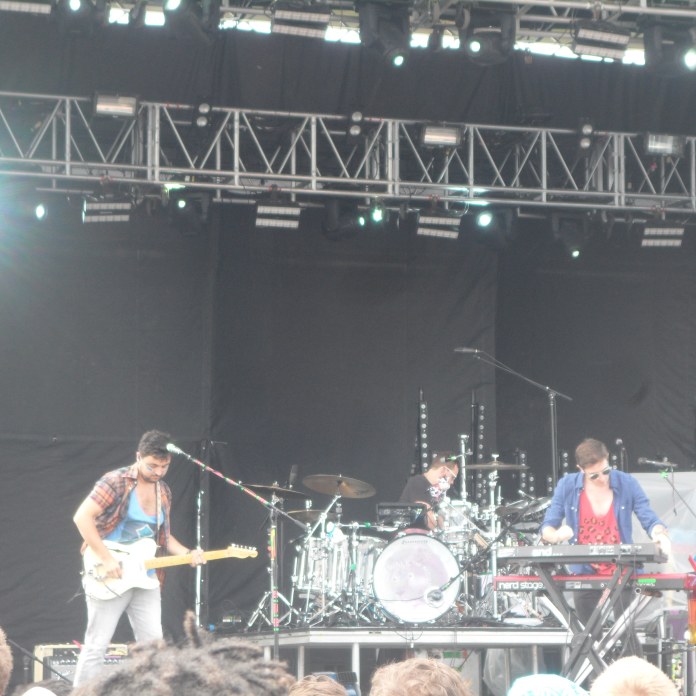 1) This weekend could not have ended on a better note. If you’ve read this blog at all you know how I feel about Las Vegas’ own The Killers. From the moment I saw the black and white Nevada flag on the main-stage just before the first show on Sunday, all the way through their set, I was ecstatic for this set. The set was filled with many of their most popular songs, and started out with “Mr. Brightside” and included a version of “I Think We’re Alone Now” made famous by Tiffany. In true Vegas fashion the show concluded with one hell of a pyrotechnic show during “When You Were Young”. I was thrilled to see the Killers again, and am looking forward to seeing them again next month at Life is Beautiful here in Las Vegas. 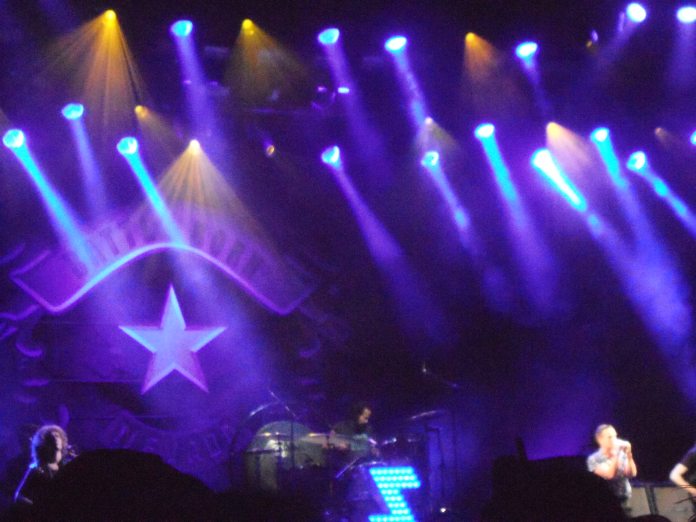 Well St. Louis, you definitely captured my heart this time. Will I attend LouFest next year, you ask? Yes, yes I will.

I learned about LouFest at the beginning of May this year, almost by accident. Walk The Moon posted on their fb page that they were adding LouFest to their Summer/Fall schedule, and that post showed up on my newsfeed. I hadn’t heard of LouFest before so I quickly googled it and looked at the awesome lineup (much more impressive than the Wakarusa 2013 lineup ever was to me).

This is fourth year for the two-day festival taking place at Forest Park in St. Louis, Missouri on September 7-8. The lineup this year includes The Killers, Wilco, The National, Alabama Shakes, Edward Sharpe and the Magnetic Zeros, Jim James, Local Natives, Fitz and the Tantrums, Trampled by Turtles, Walk the Moon, Ra Ra Riot, and The Lonely Biscuits (I looked up the Biscuits and they’re not what I expected! But that’s another post).

Of course, I got super excited the moment I saw The Killers, Alabama Shakes, and Edward Sharpe and the Magnetic Zeros in the same lineup. I immediately started looking for someone to go with me. I never thought of asking @DocMurda to come along, even though he’s one of the biggest fans of The Killers that I know, because… Las Vegas is pretty far from St. Louis. I thought of contacting local friends first. But I’m glad he was fb creeping at the time I was posting invites, because he quickly jumped at the opportunity to come along.